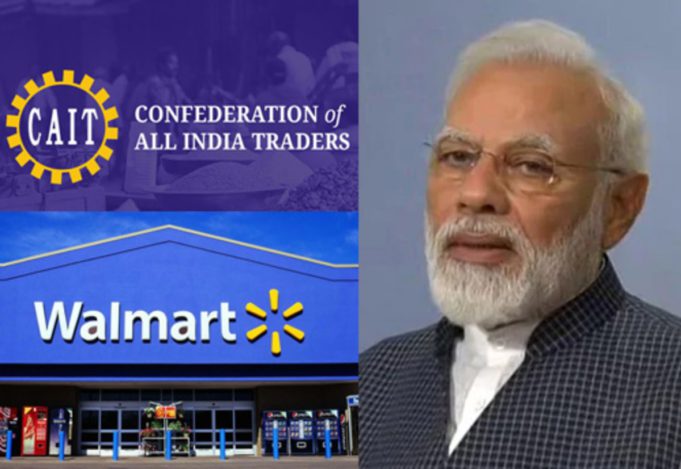 The Confederation of All India Traders has raised an issue with Prime Minister Narendra Modi over an alleged violation of e-commerce rules by major e-retailers.

In a letter to Modi, CAIT alleged that the e-retailing sector has been greatly vitiated by some major e-commerce firms, who are violating FDI policy, laws, and rules, unabated and openly, without any fear.

The traders’ body wrote the letter ahead of its Bharat Bandh’ call on February 26.

“These e-commerce companies have found various escape routes in Press Note No. 2 of the FDI policy and therefore, a fresh Press Note blocking all escape routes and abolishing all such provisions that may prompt these companies to violate the rules or policies should be prepared,” it added.

CAIT also urged the central government to set up a regulatory body to hand out legal punishment to those violating the law or policy.

Besides, it suggested that a robust e-commerce policy should be formulated and released in a time-bound manner prescribing defined parameters for e-commerce business in India.

The body pitched for setting up a special working group at the central level comprising senior officials, CAIT representatives, and independent tax experts to review the GST structure and make recommendations to the government.

CAIT also suggested the constitution of a “District GST working Group” in each district to monitor smooth GST implementation and adopting measures to widen the tax base and augment revenue.

The body noted that few recent amendments in GST have given arbitrary and unfettered powers to the government officials, which goes against PM Modi’s mission for ”minimum government, maximum governance.”

These amendments have created a state of ‘tax terrorism in India, it noted.

“The principle of natural justice has been greatly violated through such amendments where the traders have been denied any sort of show-cause notice or opportunity of hearing before taking any penal action,” the body said.

3M Reveals Plans to Reduce Plastic Use on Earth Day

3M Reveals Plans to Reduce Plastic Use on Earth Day

BRIGADE Records Highest Ever Presales of 1.53M SFT With Net Worth...